TaoTronics, The Leading Brand of Bluetooth Transmitter Field. 5 years of business Experiences with more than 1.5 Million satisfied customers, First Choice of High Quality with proper price. Sunvalleytek is the only authorized seller of TaoTronics on Amazon.

Thank you for purchasing TaoTronics TT-BA01 Bluetooth Stereo Transmitter. Please read the user manual carefully to understand its features and operation. If in doubt, please email support@taotronics.com with details.

The TT-BA01 is a high definition Bluetooth stereo transmitter, which can make any stereo device a wireless device! It does this by decoding high definition stereo signals into Bluetooth digital signals that transmit to your Bluetooth receiving device. So, you can enjoy all the music from your non-Bluetooth mobile phone, iPod, Kindle Fire and even TV, wirelessly!

This product has a built-in Lithium battery that can last for up to 7 hours on a full charge.

An audio or music playing device with a 3.5mm audio-out jack.

Pair with any Bluetooth stereo receiving devices that support the Bluetooth A2DP profile, such as Bluetooth headsets, speakers, etc,

The transmitter can be fully charged in around

2 hours. We recommend charging the unit for

least 4 hours before using for the first time.

To charge the transmitter:

1) Insert the micro-USB end of the charging

cable into the charging port of the transmitter

2) Plug the USB end of the charging cable to

an USB charging adapter or any active USB port

3) The power LED will turn red when charging.

It will automatically turn OFF when the transmitter is fully charged.

Note: You can use the TT-BA01 while it is charging. The internal circuit is protected from over-charging.

*   Note: Before pairing, please make sure

In order for your TT-BA01 to pair with other Bluetooth device, you must bring the TT-BA01 into pairing mode. This is indicated by the LED indicator flashing in red and blue alternatively.

1) Start with TT-BA01 turned OFF. Please

make sure no other Bluetooth device around is in pairing mode.

2) Bring the TT-BA01 and your Bluetooth

receiving device next to each other or within 3 feet distance.

3) Press and hold the power button for about 6-7 seconds or until the LED indicator is blinking in RED and BLUE alternately. You will see the blue light blinking first. Just keep holding the button and the light will soon change to blue and red flashing.

follow the instruction of your Bluetooth receiving device to bring it into pairing mode and it should automatically pair with the TT-BA01.

5) Once successfully paired, the LED indicator will turn RED and then flash once every 10 seconds.

If a PIN code is required for pairing, please

When your device is switched on, it will automatically connect with the last paired device. To pair it with other devices, first switch off the old paired receiving device and then pair the transmitter to the new device using the same steps listed above.

The TT-BA01 will stay in pairing mode for 2 minutes at most if no pairing device is found. Afterwards, it will go into standby mode until power off.

The TT-BA01 will switch to standby mode if pairing devices is switched off or Bluetooth disconnected.

The TT-BA01 is able to be used while charging.

When the unit is charging, the RED LED will be lit constantly until charging is over. To avoid confusion when charging and using at the same time, we recommend pair the device first, and then start charging.

Sometimes, the TT-BA01 will refuse to pair with other devices even if it is in pairing mode with red and blue light flashing. You will need to reset the transmitter to make it fresh and wanting to pair again.

Do not drop or knock your transmitter on hard surfaces as it damage the interior circuit.

° Do not scrape the surface with sharp objects.

To reset the transmitter:

You may need to try this a few times if it does not work on your first attempt.

Please read the following recomm-endations to keep your product running smoothly for a long time to come.

Keep the transmitter away from heat and

or hot areas. High temperatures will shorten lifespan of the transmitter, battery and/or the internal circuit board.

Q: My transmitter will not switch on.

Please recharge it and make sure the TT-BA01 has enough battery power. Plug the unit to a charger and see if the LED indicator will become red.

I am having trouble pairing and connecting to my Bluetooth pairing device.

next to each other or within 3 feet

with LED indicator flashing in red and blue alternatively

read ‘how to clear memory’ for instructions.

Q: After connecting and paring with my Bluetooth device, I cannot hear any music from my sound system.

the volume is turned up.

Q: Why can I not pair with my smartphone or iPad?

A: The “I-I’-BA01 is a Bluetooth transmitter, NOT a receiver. You must connect the transmitter to a non-Bluetooth audio generating device such as a Kindle Fire, iPod, TV, computer, etc. Then pair it with your Bluetooth headset/speaker.

Note:Due to Bluetooth compression/decompression, there may be a delay in audio/video uses. This is standard among all transmitters.

Q: My device is flashing RED.

A: This means the battery is low and needs to

Q: Can I use my transmitter while it is charging?

Yes, we have updated the TT-BA01 transmitter since Dec 1st 2013, so now you can use it while charging.

I haven’t used the TT-BA01 for a while, now the battery is dead. What can I do?

If the unit has not been used for more than 21 days, please charge the unit for at least 4 hours as the battery will need a full charge and be aware the LED indicator light may take several hours to show recharging is

For technical assistance, please email to SUPPORT@TAOTRONICS.COM with your purchase order number and a detailed description of your issue. We normally respond to enquiries within 24 hours.

retailer and distributor. If the device fails due to a manufacturing defect, please contact TaoTronics Support (support@taotronics.com) immediately to launch a warranty claim. We will instruct you on how to return the defective unit back to us for repair and replacement.

The following are excluded from TaoTronics warranty cover:

No return will be accepted without seller authorization.

We can only provide after sale services for products that are sold by TaoTronics or TaoTronics authorized retailer and distributor. If you have purchased your unit from a different place, please contact the seller for return and warranty issues.

I femmina a 2 RcaI

H-366T is designed to transmit audio signal of TV, DVD, MP3 etc. to Bluetooth receivers, earphones or speakers by the Bluetooth wireless technology. To help customers to realize a higher quality wireless household lives.
Welcome to chose our Bluetooth receiver to get a better experience of listening. What’s more, it will make it being available for you to set up your personal pairing password to enjoy a safer and steadier connection by using our Bluetooth transmitter & receiver combination.
Easy operation, connect the product with audio players by a audio cable, without set up after the device turn on.
FEATURES
Exquisite round design with perfect process, mini body, more smaller and lighter.
Multi-point design, one transmitter could connect with two Bluetooth devices at the same time, eg. one BT speaker and BT headsets.
High quality stereo transmission makes sure you can enjoy the auditory feast.

After the power is on, one of the blue lights flashes slowly, showing that the connection restoring mode is entered. In his mode, the Bluelooth devices connected previously will be connected automatically.
If the previous Bluetooth device is not reconnected after
1 g seconds of the stadup, two blue lights wiil flash quickly in an alternate way, showing that the paring mode is entered and a new Bluetoolh device wilt be searched.
One of the blue lights is constantly on, showing that one device is connected. The other blue light flashes up, suggesting that the second device is being searched.
If the second device has not been connected after
20 seconds, the search will stop automatically when the blue tight stops flashing. If you want to pair the second device again, you need to press the power button gently to enter the search mode. When the two devices have been connected, Ihe two blue fights will be constantly on.

First step: Turn on the Bluetooth device to
Second step: Connect the TV Bluetooth
and H-366T be paired (Bluetooth speaker or Bluetooth
with the audio cable, headset), and get it ready for the pairing
mode.

Third step: Have a long press on the power button for 2 seconds.

Here is the user manual pdf download for the DBPOWER waterproof inspection camera.

Details from the user manual 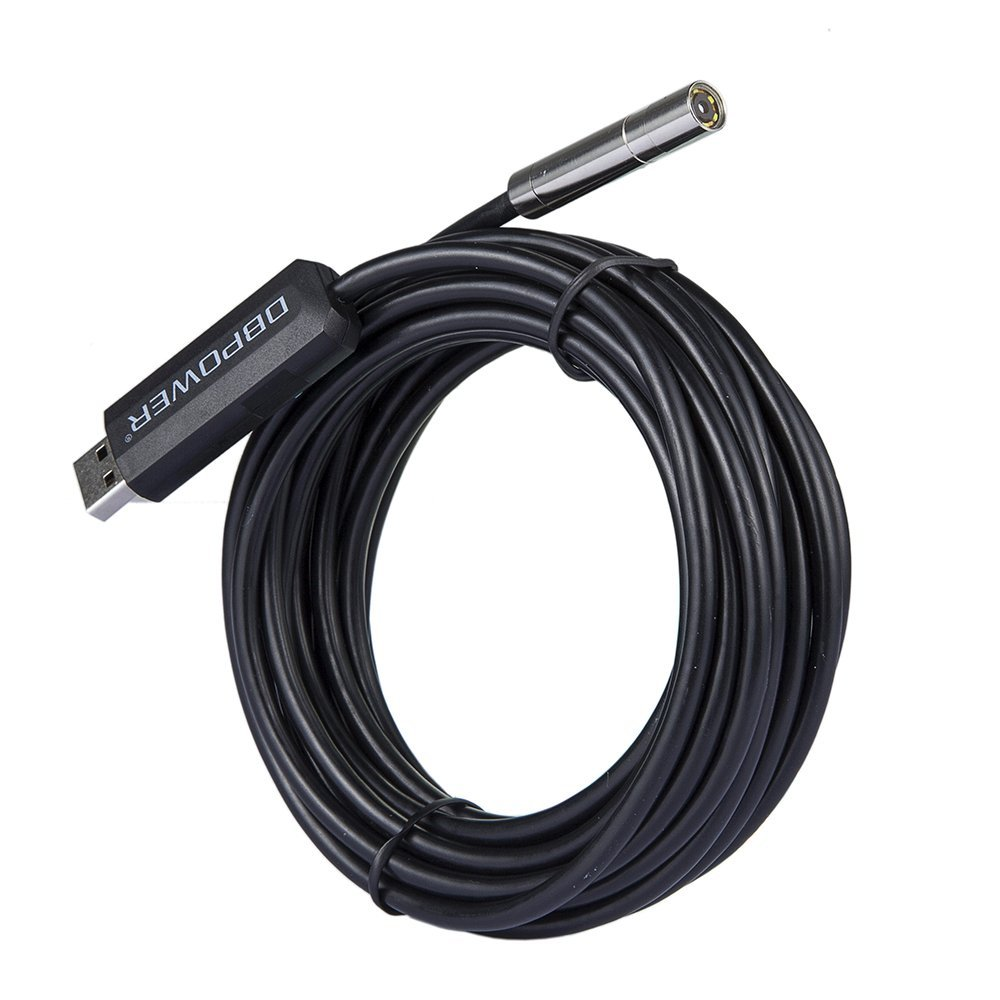 1. Inserting the CD to the CD-ROM of your computer for installing the ViewPlayCap ‘
successfully, then you can find the ViewPlayCap icon m on the desktop.
2. Connecting the USB Endoscope with your computer’s USB interface, It needs longer
time for the first time.
3. Double-click the ViewPlayCap icon m on the desktop and appear the display window as below. If no image on the display window, click “Device” and select “USB video device”, then you can see the image.
4. The LED lights’ brightness can be adjusted by the
LED adjuster on the USB Repeater;
5. Capture images: Click the icon ~ in the displaywindow.
the pictures will be stored in the pictures favodtes or set up the picture path again as need. You can find the pictures as fallowing way directly: View>Open My Pictures.
6. Video capture: Click “file” option. Select “set capture file”. Setting the file name and location and saving the video, click “Open” to save. Setting up the capture file size, click “OK”; Click “Capture” and Setting up the time limit, thee press “OK”. 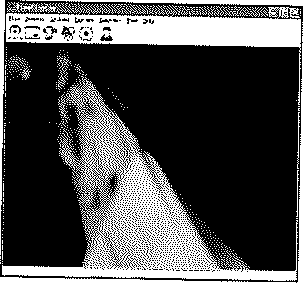 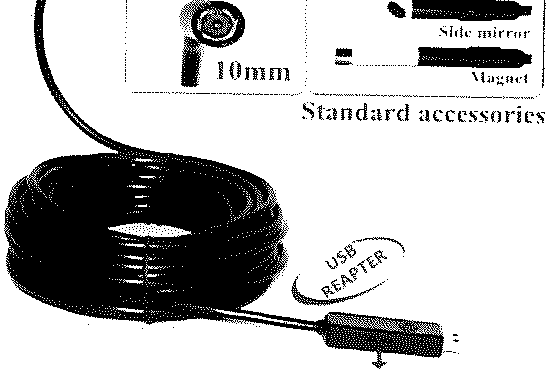